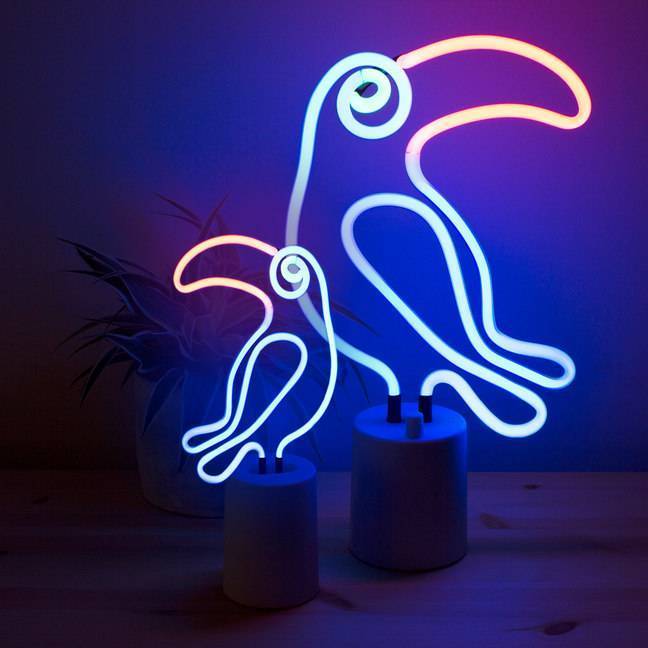 What exactly is a neon light?

Essentially, a neon lamp is a luminous glass tube filled with neon gas. By connecting electrical power to a closed glass tube, filled with low pressure neon gas, light is generated. That neon light has a special characteristic that it is highly noticeable, also during the day. And it has a warm, clear appearance.

Who is the inventor of neon lights?

Neon light was invented around 1920 by Georges Claude, a French engineer. With his invention, he moved to the United States and managed to sell two of his neon lights to a big car dealer in Los Angeles. Those neons were thàt noticeable that everyone wanted a similar lighting on their façade. Neon light advertising became immensely popular as outdoor advertising in no time, as both day and night the advertisements were noticeably visible.

What makes neon lamps so fascinating?

Neon fascinated everyone. Not for nothing, it soon got the nickname "liquid fire". The bright neon light was originally red-orange in color. But the fascination became even greater when it appeared that the use of other noble gases than neon also allowed other colors:

And the glass tubes could literally be poured into all kinds of shapes, which led to the craziest neon creations.

Where does the new neon hype come from?

Neon has a real revival and is again omnipresent. Not only in the street scene as advertisement, but also in-house as an accessory, retro neon signs and neon lights are more popular than ever. Artists, designers and interior designers go all the way and take great advantage of the powerful appearance of neon.

1) New 'neon like’-LED technology
Due to the rapid evolution of LED lighting, one has managed to capture the characteristics of original neon in colorful LED technology, which is much less expensive than the original neon applications. That brings neon (finally) in an affordable way into the living room.

2) Interior designers link the neon-hype with the tropical art-hype
Flamingos, toucans, cacti, pineapples, rainbows, ... They are all common today in the contemporary design store. By combining this popular tropical theme with neon, the hype has been strengthened.

What neons will you find at Axeswar Design?

Axeswar Design offers a wide range of affordable neon lights made with the new LED technology. This results in neon flamingos and other neon lamps with tropical designs and of various brands, including Sunnylife Australia.

In addition, Locomocean's Neon Boxes are pretty popular too. These metal boxes draw attention with neonsigns like 'Party', 'On Air' and 'Bar'.

So, now it's up to you to make the choice that best suits your needs. Our full range of retro neon lights can be found HERE.

There are no comments yet, be the first one to comment

Tropical Designtrend: flamingo's and cacti in our house

LightBox: the perfect gift that makes everyone happy!

Monthly up to date with our latest offers

Monthly up to date with our latest offers

By creating an account with our store, you will be able to move through the checkout process faster, store multiple addresses, view and track your orders in your account, and more.

You have no items in your shopping cart